My story of baptism:

I was converted when I was 16/17 years old, and was never baptized. I've always known that after you are converted that you are to be baptized, but I didn't do it. I had begun to be convicted of this last fall, but put it off and put it off and then something remarkable happened.

God put into my life, the Raimundo family, and they posed a question and challenge to me.

"Do you want to know if a person wants to obey the word of God? Simple. Give him a commandment."

This started to chafe my soul, I knew I had to obey but I had something stopping me.

But my issue was that I was afraid that people would think poorly of me, think I was childish, think I were a fool.

I wanted control. I was proud. I wanted to be my own god.

But Jesus Christ is my LORD! I am not God! God is God, and I am only His beloved servant.

The words from the Raimundos echoed through my thoughts constantly. Then a verse was brought to my attention.

Those were Jesus' words...and I was saddened because I had not obeyed.

The rich young ruler had been given commands and was also saddened, but he then turned away from Jesus, I knew that I must follow my Jesus, anywhere and everywhere He would lead me.

I began to ask friends to pray for me.
You see, my fear of men and of ridicule was not founded on the idea that getting baptized would look or be odd, but rather...it would not be the first time I would do this, it wasn't even the second, truly it would be both the third time...yet the only time I would be baptized.

I had gone through baptism as a very small child, when I did not understand the gospel. Then when I was about 12 I had an "emotional" experience, and it seemed good to me to get baptized as that was expected and it went with the flow. It was the result of bad judgment from poor character. Both times the only thing that happened...I got wet. That's it.

Thankfully God didn't give up on me.

Christ faithfully pursued me until I was converted, then He now constantly woos my soul to be conformed to His image.

As I was saying, those two previous dunkings held me back in fear, as I did not want to be called a fool or thought less of. Then slowly it was brought to me, by Christ's sweet mercy, I'm complete in HIM! It doesn't matter what the public thinks, or even what you, or my family, or the President, or any human being thinks. I must obey Jesus Christ, no matter the cost.

So, for weeks and weeks I prayed and finally told my parents that I wanted to talk of being baptized.

Thankfully, both my parents asked questions and we went over some things. I then talked with my last pastor (a dear friend) and my new pastor. Then I was baptized. 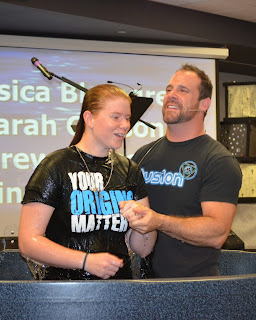 September 29th, in the year of our Lord Jesus Christ 2013

After that I enjoyed the company for a bit with the other 16 people who were baptized with me, then my family went to lunch to celebrate my baptism and our joining this new church.


So, some technical stuffs:

It is an act of obedience.
It is telling the world who secures my identity. Who I belong to, who I live for, who I honor, who is my Master in life.

Baptism is an outward sign of an inward change. That Jesus Christ is Lord and Saviour of this person's life.
Baptism is a commandment given to Christians.
- Matthew 28:19
- Acts 2:38


Romans 6:1-11
"What shall we say then? Are we to continue in sin that grace may abound? By no means!
How can we who died to sin still live in it?
Do you not know that all of us who have been baptized into Christ Jesus were baptized into his death?
We were buried therefore with him by baptism into death, in order that, just as Christ was raised from the dead by the glory of the Father, we too might walk in newness of life.

For if we have been united with him in a death like his, we shall certainly be united with him in a resurrection like his.
We know that our old self was crucified with him in order that the body of sin might be brought to nothing, so that we would no longer be enslaved to sin.
For one who has died has been set free from sin.
Now if we have died with Christ, we believe that we will also live with him.
We know that Christ, being raised from the dead, will never die again; death no longer has dominion over him.
For the death he died he died to sin, once for all, but the life he lives he lives to God.
So you also must consider yourselves dead to sin and alive to God in Christ Jesus."

Christians, and only Christians.

The Bible teaches that those who repent of their sin are to be baptized. Baptism is a symbol, it is not what saves a person, nor what makes that person righteous.
- Mark 1:4
- Luke 3:3
Thoughts from Unknown at 12:57