Dusts off the cobwebs and opens windows and doors...HEY!! ALL Y'ALL!!! How are you all doing?!

The past months have been very full of activities for me, you will soon see what I've been doing. But this is a post to let you know...I'm back y'all!!
Soon I'll be finishing the previous series and then I will be introducing some new projects and series. I'll be trying my hand at a few "DIY" ideas, and also starting a handful of theological series. So, I hope you enjoy it.

Quickly though, before I leave you once more, I would like to show you some of God's faithfulness.
This past week we had some pretty bad storms, there was a wall of weather that was producing a number of "rotations". I live in Tornado Ally...we get tornadoes many times a year, thus hearing "rotations" in clouds is not very encouraging. I went to my CollegePlus Prayer group and asked them to pray.

I could tell you the story...or I could just show you the radar pictures of what God did. 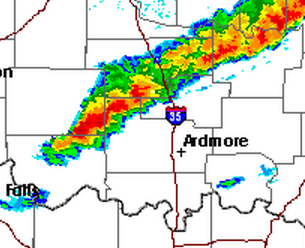 For some context. If you would, look at the small "+" sign just below and to the left of "Ardmore". Now, see where the red vertical line (I-35) is in relation to our "+" sign. Finally imagine that the "+" were on the OTHER side of the highway. That would be approximately where I live. 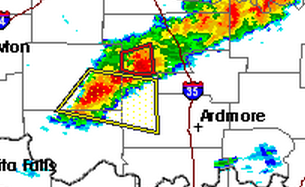 So, you can see that this is fairly legit storm. Green represents rain, yellow is thunderstorms, orange is severe storms, and the red is bad weather, here where I live, red means fierce winds, sometimes hail, tornadoes, and tons of rain. (Although, we always need rain!) 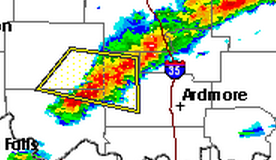 At this point, the storm doesn't "look" scary, but it had the right conditions for tornadoes, and there was a rotation to the north and south of where we were. So I started to pray and asked my friends to pray. What happened next stunned us all and put us in awe. A reminder that our God is very alive, and He pays attention to the prayers of His people. 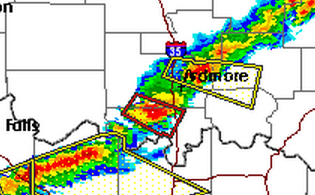 The storm split right around us, we got lots of rain - but no tornadoes, no hail, no wind damage, nothing that "should" have happened. 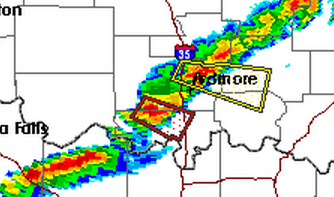 Anytime you think "God doesn't listen to me anymore, He doesn't care about my life." Remember that He does care, I'm just me, nothing special on my own, but I am a called disciple of Jesus Christ, I am the daughter of THE King. I have the right to pray and talk directly with God because of Jesus. If you are a Christian, you have this same ability. He's listening, just talk to Him.

James 5:13-20
"Is anyone among you suffering? Let him pray. Is anyone cheerful? Let him sing praise. Is anyone among you sick? Let him call for the elders of the church, and let them pray over him, anointing him with oil in the name of the Lord. And the prayer of faith will save the one who is sick, and the Lord will raise him up. And if he has committed sins, he will be forgiven. Therefore, confess your sins to one another and pray for one another, that you may be healed. The prayer of a righteous person has great power as it is working. Elijah was a man with a nature like ours, and he prayed fervently that it might not rain, and for three years and six months it did not rain on the earth. Then he prayed again, and heaven gave rain, and the earth bore its fruit.
My brothers, if anyone among you wanders from the truth and someone brings him back, let him know that whoever brings back a sinner from his wandering will save his soul from death and will cover a multitude of sins."
Thoughts from Unknown at 23:44